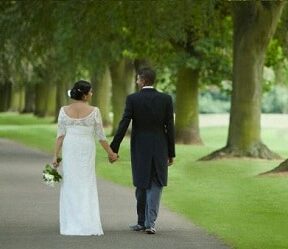 Newspaper announcements
You may wish to have your engagement announced in the local or national newspapers, either as a way of telling all and sundry or as a special way of marking the event. The traditional way of making the announcement is for the bride s mother to take responsibility, and so formal announcements tend to depend on her present status for their wording.
The correct formal wording is:
Mr and Mrs George Davidson are pleased to announce the engagement of their daughter Jane to Mr John Smith, son of Mr and Mrs Alan Smith of
Newport, Isle of Wight.

Or, alternatively:
The engagement is announced between Jane, daughter of Mr and Mrs George Davidson of Westminster, and Mr John Smith, son of Mr and Mrs Alan Smith of Newport, Isle of Wight.
A less formal version could be:
George and Jean Davidson are delighted to announce the engagement of their daughter Jane to John, son of Alan and Elizabeth Smith of Newport.
If the girls parents are separated or divorced the engagement could be worded:
The engagement is announced between Jane, daughter of Mrs Jean Davidson for Mrs Jean Watson if she has remarried) and Mr George Davidson and John… etc.
Many other variations are possible in formal announcements if the girl is adopted, a stepdaughter, a niece, fostered, etc. Just remember that there is no need to get tied up with formalities – a simple statement of fact, and of the relationship, is much the best.
These days many couples prefer to announce their engagement themselves whether it is a first or second marriage. In this case the announcement can be formal or informal, with the bride’s or the groom’s name coming first and with or without the date of the wedding. The main thing to remember’with all newspaper announcements is that the copy may be needed up to four weeks be.ore publication.

Checklist for announcing your engagement
Use this list to make sure that you tell all of you family and friends that you are engaged, noting whether you are going to tell them by visit, phone call, or letter.