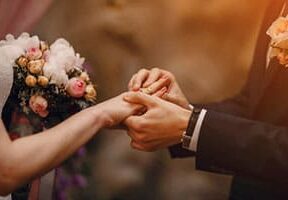 Wedding reception
The way you deal with the arrival of guests at the reception will depend on the size and formality of the reception and the arrangement of the place where you are holding the reception.

If there are lots of guests who came along to the service but who have not been invited to the reception, it is a nice idea to have a small receiving line for them outside the church, to give them a chance to say their good wishes personally. This will also get you into practice for the more extensive one at the reception! The idea of any receiving line is simply to make sure that every guest has the chance to congratulate the couple, wish them well, meet the parents, and thank the hosts of the wedding – whoever they happen to be. Consequently a formal receiving line at a formal reception will include all the people who have been important in the planning of the wedding.

A full line-up for a receiving line will be as follows, in this order: bride’s mother, bride’s father, groom’s mother, groom’s father, bride, groom, chief bridesmaid, other attendants. It is generally better not to have small attendants in the receiving line; they will be too small to join in its main purpose, and will quickly become bored. Generally the best man will not be in the receiving line as he is supposed to be the last to leave the church, so that he can be sure that all the guests have been safely dispatched to the reception. However, if the receiving line is delayed until all the guests are at the reception venue, the best man could be included next to the groom and before the chief bridesmaid.

At a less formal reception the receiving line could simply consist of the bride’s mother, the groom’s mother and then the bride and groom, if the wedding is informal, guests can be greeted by the bride and groom on their own. This last arrangement is also often a good idea when relationships are complicated by divorce, step-parents, etc.

At large informal receptions the services of an announcer are sometimes employed, although this is probably rather an affectation unless you are really moving in the highest strata of society!

Generally it is sufficient for each guest to make it obvious to the first in the receiving line who he or she is; don’t expect everyone to remember you, as all the guests will be out of their normal context and it is easy for minds to go blank when faced with lots of semi-familiar people. The official way to continue the receiving line is for each person involved to present the guest to the next in line with an appropriate remark suited to the depth of their acquaintance – for instance ‘James, this is my cousin Peter’, or ‘Mrs Jones, meet Julie our chief bridesmaid’, etc. In fact, the receiving lines these days are likely to be far more spontaneous, and people are unlikely to need hints on what to say to the right people. 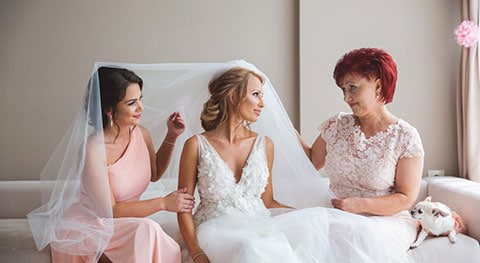 If you are having a receiving line you should stay in it until every guest, as far as you can tell, has arrived safely. Once the company seems to be complete, then the meal can be started. If you are having a sit-down meal, the bridal party will make their way to the top table and this will be the signal for the waiters to start serving; everyone else should be in place by this stage. If you are having a buffet, the Master of Ceremonies or the bride’s father can loudly invite everyone to begin eating.

Seating
If you are having a buffet you need to bother very little about seating people in particular places, although you should always make sure that the bridal party has a formal table where they can be served. If you are having a sit-down meal, however, it is important to sort out the seating sensibly so that everyone is in the best position through the meal.

The guests like to be able to see the bridal party in all their splendour, and it is also nice for the newly-married couple to be able to look out over the reception and see all their friends and relations enjoying themselves, so there should be a top table where the main participants sit. This is generally arranged so that there are people on one side only, facing the rest of the room, and the table may be set on a raised dais or stage if the room has one. The basic top table arrangements for traditional weddings are shown left.

Of course, there are numerous variations within these basic schemes; for instance, if one parent is widowed, and the other set of parents have divorced and only one has remarried. The basic idea is that husbands and wives (or ex-husbands and ex-wives!) should not sit together. If parents have divorced and remarried, their new partners should be at the same end of the table. Bearing these considerations in mind, sort out a sensible arrangement; don’t let convention dictate an uncomfortable arrangement, for instance if it would decree sitting two people together who can’t stand each other!

If one of the chief participants is missing, for instance, if one of the parents is widowed or if another cannot be present because of illness, fill the gap on the top table with a relative or a close family friend who will be able to take on the appropriate duties of conversation and hospitality.

The top table may be part of a horseshoe shape or E shape, with longer tables butting up to it at right angles; if this is so, the groom’s family and friends should be at one end of the arrangement and the bride’s at the other. This is simply to make conversation and mixing among the guests easier; if one guest finds that he only knows the groom and he is sitting beside someone who only knows the bride, conversation may be a little difficult to initiate.

If you are having a sit-down meal it is best to plan where everyone is going to sit, even if there are lots of smaller tables dotted around the room. If you do the planning you can make sure that everyone will be sitting near guests they will find congenial, that children are sitting with, or under the watchful eye of, their parents, and that there is a good balance of men and women on each table and through the room in general. You may prefer to have all the children sitting together near one of the doors so that they can disappear to the garden or another room to play when they get bored without too much disruption. Any mothers of small children should also be near the doors so that they can get up without embarrassment to deal with feeding, changing, crying, etc.