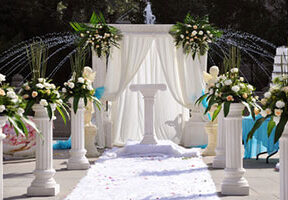 Two Men are Marrying Abroad – Gay Marriage Planner
When I was younger, I thought one of the good things about being gay was the lack of commitment. As the first countries legalised gay marriage or partnerships, the idea didn’t really appeal. But I grew up, and the idea of making a lasting commitment to my partner became as important to me as the equal recognition civil partnerships give to gay couples. Getting married was a great way of dealing with the non-romantic practical issues. In an instant, it gave us equal joint ownership of the flat I owned, avoided inheritance tax if I died, and next-of-kin visiting rights should one of us end up in hospital. And, of course, it was also a big romantic gesture!

We decided to get married in Canada because, although we live in London, my partner comes from Canada. So for our London friends and family it would be a fun trip to Toronto, and for our Canadian friends and Michael’s family, it kind of made up for not seeing them as much. Also, it was in the summer of 2005, before it was legal in the UK – a small but important technical point. But we did it knowing that our Canadian gay marriage would be recognized (as a civil partnership) in the UK, which was important, too. If it was just a token thing, I don’t think we would have done it.

Getting married abroad also had the unforeseen advantage that because we were planning an event on the other side of the Atlantic, we couldn’t get too involved in the organization. We found the venue, the caterer and the officiant on the Internet. When we spoke to Rene, our caterer, on the phone, we realised pretty quickly that we could trust her, and that she understood what we wanted. So we were able to delegate some pretty major decisions to her: the color scheme at the venue and flower arrangements, for example. 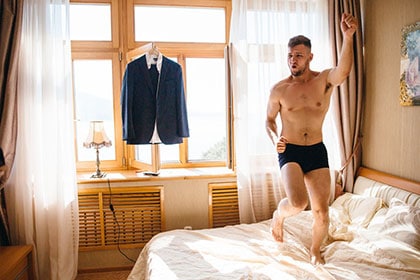 And as a present for our guests, we found a cake company in Toronto that made ‘gingerbread couples’ – usually a man and wife – in gingerbread, iced to match what the bride and groom were wearing. We asked for a same-sex gingerbread couple and, without batting an eyelid, they made 80 of them for us, each iced by hand with the same suits, ties, shirts and shoes as we wore on the day. Our guests loved them.

On the day, I was nervous and it all went far too quickly, but I remembered my boss telling me beforehand that it would be the one day in my life when you’re in a room filled with people who love you, and who you love. He was right, and it was a great feeling. I remember at one point watching my mum dancing in a line of our gay friends to ‘It’s Raining Men’ and thinking to myself: perhaps this is it, the moment I dreamt of as a teenager, but that I barely imagined would ever happen – total acceptance of my life in all its parts by everyone in it. As a celebration, and in hope for the future, it was unrivalled.
Philip Reay-Smith, TV news reporter