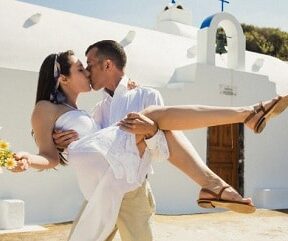 Sharing your news – announcing engagement
The first thing that you want to do when you are engaged is – tell everyone!
And, of course, all your family and friends will want to share in the good news and to wish you well. Announcing an engagement is a much less formal event these days than it used to be, but it is still worth following a few basic guidelines to make sure that everyone hears the news and that nothing is left out.

Telling parents
The days are past when a young man had to have a formal interview with his prospective father-in-law to ask him for his daughter’s hand in marriage; these days an engagement is almost exclusively a matter for a couple to decide for themselves. However, a wise man will try to make sure that he is on good terms with his fiancee’s parents, that they have no absolute objection to the marriage, and that they are satisfied that he has a good chance of making their daughter happy and providing a stable marriage, both emotionally and financially.
It is traditional to tell the bride’s parents first, ideally on a visit from both partners. If you cannot tell them in person, a phone call is the next best solution. Try not to write with the news unless you live impossibly far away from your family. The next people to be told are the groom’s parents, again in person or by telephone. These days most people are already well acquainted with their future parents-in-law before the engagement is announced, but there are exceptions especially if the couple has met at college or abroad, if you are already engaged before you meet your fiance(e)s parents, remember that they are probably feeling just as nervous as you are! Try to be relaxed, and you will have the best chance of starting a pleasant relationship that will stand you in good stead in later years.

Telling families
It is really up to you how you tell the other members of your families, and will probably depend on how close you are geographically and emotionally. Some people will appreciate a visit from you and your partner; others will be happy with a phone call, and still others will be quite satisfied with a letter. However, make sure that you try to tell them all roughly at the same time, so that no-one is offended.

Telling friends
Your friends may well have guessed at your engagement before you tell them officially. Once again, try to make sure that everyone is told at roughly the same time, and don’t leave anyone out. This is rarely a problem as most newly-engaged couples are only too happy to spend an afternoon on the phone ringing round with the good news.

Announcing at a party
You may wish to announce your engagement as a surprise at a party. Traditionally this should be a party given by the girl’s parents who, along with the man’s parents, should already be in the know. Her mother issues the invitations – keeping the purpose of the party a secret – and then the official announcement can be made by her father or by her fiancé. Other couples prefer to have a party for their friends and announce the engagement to them, having already told both sets of parents. Usually the engagement ring is not worn in public until the engagement has been officiality announced.

Parents’ duties
As soon as possible after the engagement has been announced, it is customary for the two sets of parents to try to meet. This could be arranged by the couple themselves, or one set of parents can act as host and hostess to the other. Of course this may not be possible If they live at some distance from one another, so in this case it is a nice gesture if they exchange letters mentioning how happy they are for the couple concerned, and that they are looking forward to meeting one another at the wedding.

Keeping quiet
It would be in very bad taste to announce your intention to marry someone else if you were still in the middle of Incomplete divorce or annulment proceedings – or, even worse, if you had not yet started them. Wait until you are both fully free to marry before making any announcement.

If you still didn’t find your bridal ring set, please check out our web page and you will find definitely something beautiful for you!