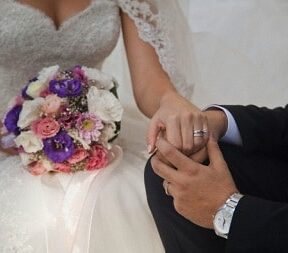 Alternative wedding ceremony
There are many variations on the traditional basic wedding; you may want to have a wedding that is a little bit different because of preference or because of unavoidable circumstances. Here are some of the options for varying your wedding ceremony.

Military wedding
If one or both of you is in the armed forces, you may wish to have a military style wedding. If the bride is in the forces she will probably prefer a traditional dress to her uniform, while the groom may wear either his dress uniform or his regulation version. If other military personnel are among the guests or attendants they may also wear uniform. The bridal party often leave the church under an arch of crossed swords held by a guard of honour, and a military sword may be used instead of a knife to cut the cake at the reception.

Clergy weddings
If the groom is a minister, the couple may choose to have the wedding at his church rather than at her home church; the groom may wear his vestments or ordinary clothes. It is often customary to invite the entire congregation to attend the wedding service itself, although they don’t have to be invited to the reception. If the son or daughter of a minister is marrying the couple may ask that minister to take the ceremony instead of the minister of their chosen church; this generally causes veiy few problems among the people concerned. Alternatively, the father may be asked to pray for the couple, or to give the address.

Double weddings
Double weddings are most usually conducted when two siblings plan to marry at around the same time; having a double wedding means a saving in time and administration, since many of the same people would be invited to both weddings, and also a considerable saving on cost! The matters of the processions into and out of church, the marriages themselves and the organisation of the speeches, etc, at the reception will need careful planning, but once these details are fixed double weddings can be very special occasions indeed.

Mixed denominations
Marriages can generally be arranged quite easily between people of different denominations; see ministers of the denominations involved and work out how best to conduct the wedding service.

Mixed religions
Some religions will not marry one of their members to a member of another religion; it is important to check this at an early stage. If neither religion will marry you in a religious ceremony, it may be necessary to have a civil ceremony. With certain religions it may be possible to combine the two traditions and have a very personal service designed around their guidelines; this will need to be talked through thoroughly with leaders of both religions to check that it is an acceptable option.

Marriages of older partners
It may be that you and your partner are older than the traditional age for first marriages, in this case, it may well be inappropriate for the wedding to be conducted by the bride’s parents as host and hostess, and you may wish to take over all the expenses and the administration yourselves.

Foreign languages
Sometimes one or two of the key people at the wedding, for instance the bride’s or groom’s parents, do not speak English. In this case it is tactful to have fluent interpreters positioned near them in church and at the reception so that they can take a full part in what is going on. If you are getting married in Wales you may wish to have the ceremony in Welsh; in this case again you should provide an interpreter for those who don’t speak the language.

Problems with parents
There is often difficulty if the bride’s parents are separated or divorced, or if one of her parents has died. Remember that it is the relationship of the hosts and the bride that is important on the invitations, so these should make it clear if the wedding is being hosted by the bride’s mother, stepmother, foster-mother, aunt, etc. If her father is divorced from her mother he may want to contribute to the wedding or to give his daughter away; this depends on her choice, which will probably depend in turn on how close she is to her father, whether she has a stepfather, and whether relations between her natural parents are strained or cordial.